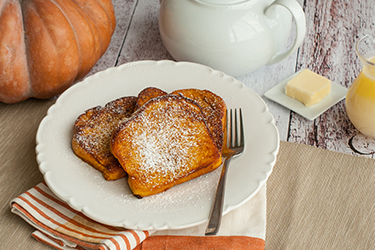 Combine the milk, eggs, vanilla, cinnamon, brown sugar, pumpkin puree, and salt in large bowl, and dip each piece of Tressée into the egg mixture.

Add the canola oil to a large heavy-bottomed frying pan, and cook the French toast over medium heat for 5-7 minutes per side, until golden brown. Garnish with powdered sugar and serve with Buttermilk Syrup.

Combine the buttermilk, sugar, and butter in a small saucepan over medium heat and bring to a boil, boiling for 1 minute. Take off the heat and carefully add the vanilla and baking soda (mixture may boil harder for a moment). Stir well and serve immediately.